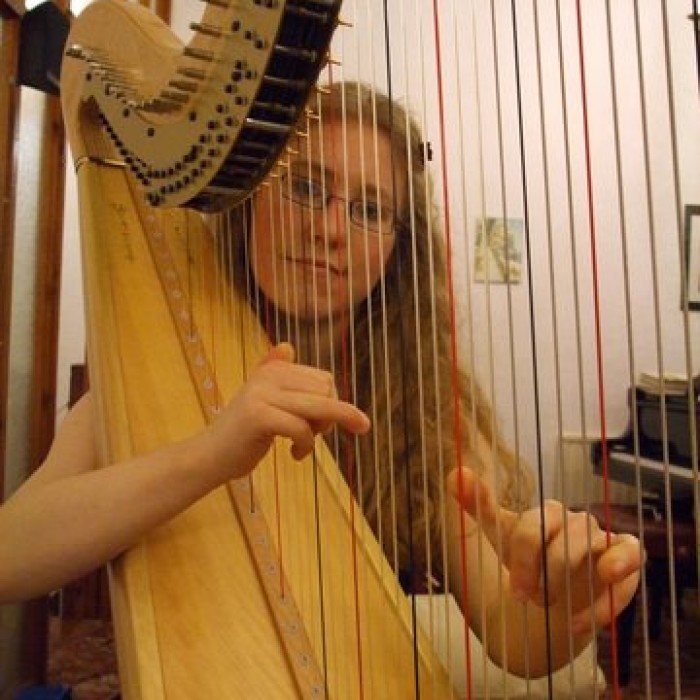 After initial lessons from her parents at a very young age, Pembrokeshire born Verity attended the Junior Department of the Royal Welsh College of Music and Drama and studied with Kathryn Hardmann. Verity ‘s secondary education was at the prestigious Yehudi Menhuin School where she studied the harp with Gillian Tingay and the Violin under Rosemary Warren-Green, Simon Fischer, Suzie Meszaros, Hu Kun . Verity studied principal study Violin and Harp at Trinity College of Music with Michael Bochmann, and had occasional tuition from Ofer Falk, her harp teachers were Sioned Williams and Gabriella Dall’olio. She graduated with a First Class Honours degree, and received the TCM trust silver medal award for outstanding contribution in the string department.

As a young player, Verity won numerous prizes and awards in Festivals and competitions throughout Britain, including The Martin Musical Scholarship Award: for the most outstanding harpist, Nansi Richards Competition, the Most Oustanding Musician Award at the Abertawe Festival of Young Musicians, and prizes at several major Eisteddfodau in Wales. More recently, she was finalist in both the Leonard Smith Duo, and Vivian Joseph Classical Concerto competitions at Trinity, and got through to the second round of the BBC CO auditions for orchestral Violin in 2009. Verity’s solo performances have been at prestigious festivals and venues throughout the UK, including The Wigmore Hall, The Fishguard International Music Festival, Southwark Cathedral, Waltham Abbey, St. Paul’s Covent Garden, and Blackheath Halls.

She has appeared as soloist with The Haverfordwest Male Voice Choir on tour in Europe in 1998.

Concerto appearances include with the Yehudi Menuhin Orchestra on tour in Britain. Verity has led many orchestras both at the Menuhin School and at Trinity under well-known conductors including Mystlov Rostropovich and Sir Peter Maxwell Davies. As a freelance player she has played in venues such as The Royal Albert Hall, The Royal Opera House, The South Bank Centre, and the Millennium centre, Cardiff with Chamber and full orchestras including: English Symphony Orchestra, Guernsey and Jersey Symphony Orchestras, Orchestra Europa, Charities Philharmonia Orchestra, Wren Ensemble, Contemporary Music Group, and most notably the St Petersburg and Bolshoi Ballet companies both here and abroad.

In addition to performing, Verity enjoys teaching. She gained her LTCL diploma in 2008, and has been harp and violin tutor for Blackheath Conservatoire, Lewisham and Southwark Music Services, and a private practise. She has managed and led a music workshop to 300 children in the borough of Lewisham, aiming to popularize the harp, and encourage music making in a declined area.

Verity performs regularly with violinist Michael Bochmann, harpist David Watkins, and her brother Giles Thirkettle, in recitals of especially arranged works for two violins and two harps. She has also performed on several occasions with the Bulldog Scholars: The Vardaryan String Quartet.

She has previously performed in many hospitals, around London and Wales, including Great Ormond Street Hospital, and she is continuing this work with the “Well Tuned” organisation, by regularly giving concerts and playing to patients around the wards, in Queen Elizabeth Hospital in Greenwich. Verity also performs regularly with the Theatre Company, Yaller Skunk, in their productions in Catford Broadway Theatre.