The History of the Conservatoire, Blackheath

Today the Conservatoire delivers group and individual courses with classes suitable from birth to adult learning. We offer music classes, art courses and drama and acting classes. However, until just over 25 years ago the organisation was originally two entities, one focusing on music and drama and the other art.

The Blackheath Conservatoire of the Arts is the result of the grassroots action of the local South East London community. In 1881 local residents formed the Blackheath Conservatoire of Music, and, fourteen years later, the Blackheath, Lee and Lewisham School of Art. Driven by a desire to bring the arts to Blackheath they purchased shares in a company established by local resident William Webster. The income generated funded the building of the Conservatoire of Music (opened in 1896) and the School of Art (opened a year later), both designed by Edmeston and Gabriel and Grade 2 listed in 1992. Many of the founders were influential professional musicians and artists, which led to a very high quality of tuition. With the adjoining concert venue, the Blackheath Halls, we form part of the oldest surviving purpose-built arts complex in London.

William Webster (1855-1910) was a polymath, distinguished in many fields. Trained as a chemical engineer, he had many artistic and scientific interests. As an accomplished violinist, he played with professionals in public concerts. He also sung and had paintings exhibited in the Summer Exhibition at the Royal Academy. He was a fellow of the Chemical Society and perfected a system for the electrolytic purification of sewage, in addition to being a pioneer in X-ray research. It was this which contributed to his death at 55. His grave can be found in the nearby churchyard of St Margaret’s Lee.

The current Music Building is built in the Queen Anne style of Leicester brick. To the front, there are three storeys and five windows. The first-floor windows have pilasters with round-headed pediment containing shell tympanum and a musical keystone. The Ground floor has cambered windows with keystones containing emblems of the British Isles. The basement was used as an air raid shelter during World War II. Graffiti from this time still exists on the walls.

Known originally as the Blackheath Conservatoire of Music (BCM) the organisation has offered many different opportunities throughout the years for learning and study. Some of the many classes in addition to traditional individual music lessons have included in the early 1900s, Musical Kindergarten (the precursor to our very popular early years' programme), and Physical Exercise. Other interesting classes have included Fencing and Deportment, Elocution and Dramatic Classes and Modern Languages (French, German and Italian) all available to learn at the Blackheath Conservatoire of Music in 1915. Teacher training was even offered in 1921 for interested students wanting to become professors of music.

For a community organisation, we have some very famous and high-achieving alumni. 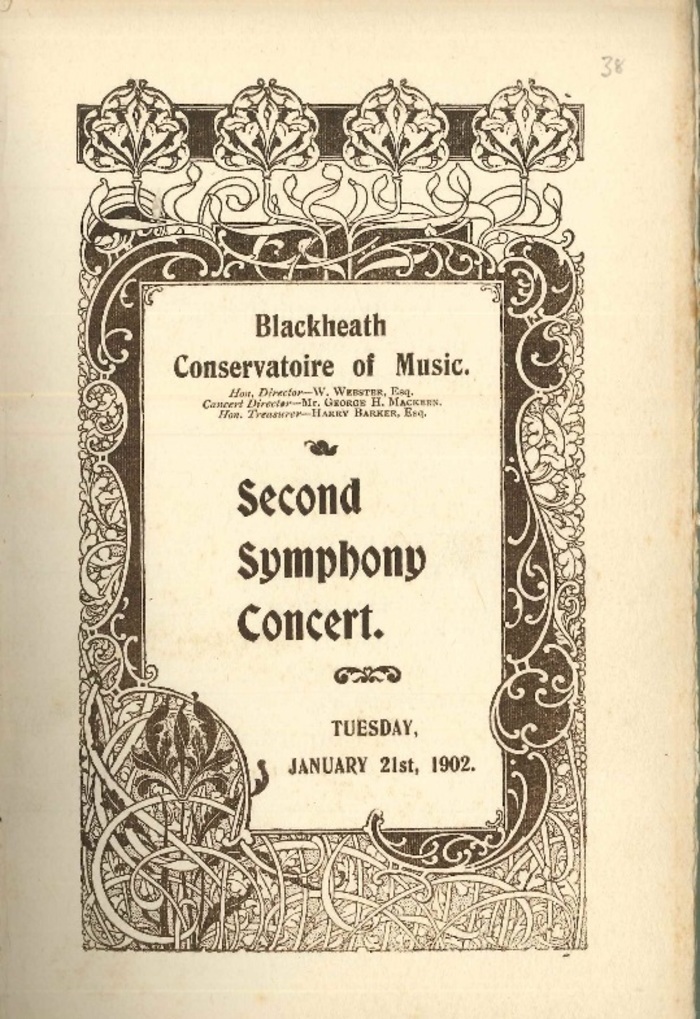 Concert Programme from 1902. The Blackheath Conservatoire of Music held concerts featuring guest musicians and students at the Blackheath Halls.

The Blackheath School of Art

The Art Building is a beautiful space, taking full advantage of the Northern light. It is one of the only remaining Victorian art studios in the country. At one time there was also a row of artists’ huts and teaching rooms alongside the studio.

The first use of Art as Therapy

The first principal was John Howard Hale who worked tirelessly promoting the school and its importance in the community until his retirement in 1928. Supported by Lady Kitchener, Hale initiated art therapy classes in 1918 for returning soldiers from World War I – persuading both teachers and students at the school to work with him at the Bermondsey Military Hospital in Ladywell, recognising, along with the doctor in charge, the potential of craft to hasten the recovery of soldiers.

His successor was John Edgar Platt, a well-known exponent of the Japanese woodcut method. Both principals organised exhibitions and guest lecturers to help promote the important work going on at the school and to wider London audiences. The exhibitions included The Art of the Wounded Soldier in 1918, Save the Countryside exhibition 1930, Charles Paine Advertising Posters in 1931, Commercial and Artistic Printing Crafts in1933, Exhibition of BSA Teachers' Works in 1934 (including Charles Paine, John Platt, Douglas Bliss, James Woodford and others) and Contemporary Art Society Recent Acquisitions 1934.

The London County Council (LCC), the organisation, which was in overall control of London art schools, decided that the Blackheath School of Art should close in 1940. The LCC took back all of the equipment at the school. The school closed in September 1940 and effectively merged with Goldsmith’s – at the time the Blackheath School of Art had marginally more art students than Goldsmith’s. John Edgar Platt, along with a member of the teaching staff (possibly Charles Paine), went to work at Goldsmith’s and only two students decided to continue their art lessons at this time. 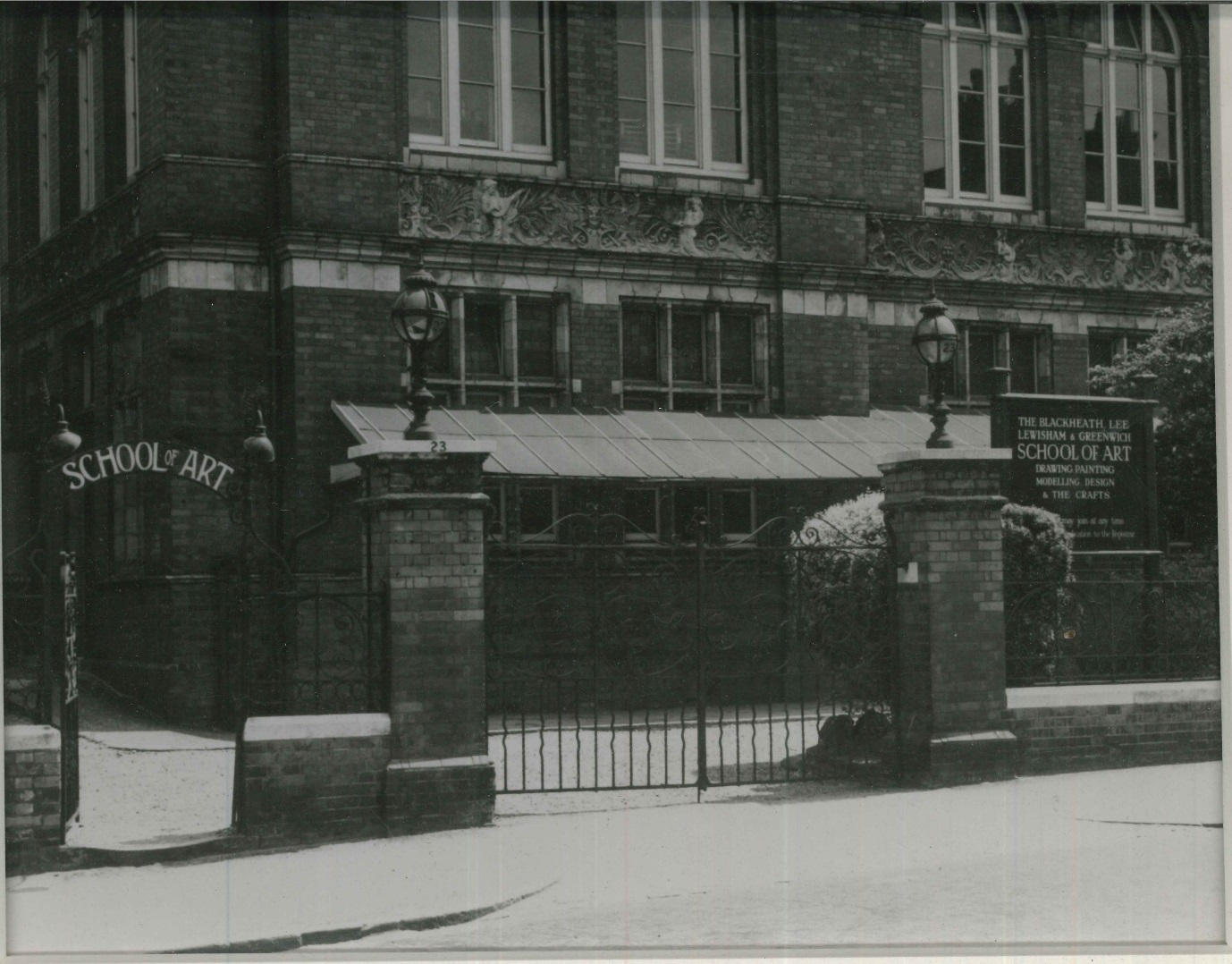 Entrance gate to the Blackheath School of Art, circa the 1930s.

From 1940 to 1983 the Ministry of Defence Pay Corps took over the art building – it was not the first occasion that BSA had been displaced from its permanent home having moved for the army from 1918 to 1921 and relocating temporarily to 5 Lee Terrace, opposite St Margaret’s, Lee. The trustees of the art school remained in place, even though the school was no longer active, and decided to re-open the art school in 1983 after the vacation of the building by the pay corps.

Led by the designer Edward Pond, Neil Rhind and the Board of Trustees, the Blackheath School of Art re-opened in 1983. The school continued independently until the early 1990s when due to financial problems it merged to become a part of the Blackheath Conservatoire of Music and the Arts.

Today the art school delivers group and individual classes for students of all ages, starting from 6 months, in art, drama and music.

Finances had for a long time been perilously tight and in 2013 there was a large-scale public campaign to save the Conservatoire from closure. Thanks to the loyalty and generosity of our local community we were saved. Since then we have worked hard to be a true community resource offering tuition, classes and events of the highest quality, for the benefit of young and old alike. We have undertaken significant improvement works in the Art Building, opened a popular café, The Brockley Deli, and children’s favourite, The Creativity Garden. Visitors can enjoy intriguing musical sculptural installations by London-based Mexican artist Guillermo Monroy on display, and the ever-popular floral piano on the front lawn. We continue to look for ways to deliver high-quality accessible and sustainable arts.